The very best hitters in fastpitch softball swing mainly with their body.  Almost every other hitter (99%) swings mainly with their arms.   Why is this, what is the problem?   The problem is fastpitch softball hitters are all being taught the same bad hitting cues (listed below) by their instructors, coaches, former players, at hitting camps and even from other parents:

When the very best hitters swing with their body they are doing none of these bad hitting cues.  Any of them make you swing with your arms which causes a significant decrease in your power, consistency and big problems with your timing.

Below is one of my 10 yr old students swinging with her arms because of what she had been taught before.  She rarely hit the middle of the ball.  She mostly hit foul balls, weak grounders and fly balls.  Her dad said she was just an average hitter. This is what almost all hitters (99%) look like swinging the bat because of the bad hitting cues (listed above) being taught by almost everyone. 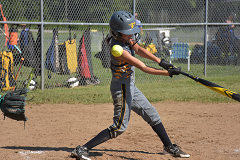 I was at one of her tournaments after ahe had 5 or 6 lessons and she was still struggling because she still felt she had to swing fast to hit the ball hard.   Between games I told her to swing with her body like she was learning in her lessons.   I told her to concentrate on what we have been working on, just use your practice swing and trust it.  Her dad said see what happens, it can't get worse.  The photo below is in the next game using her body, you can see the swing looks the opposite as before (above) and the results are also the opposite. The result of this swing was a hard line drive to the left center field fence for a double.  I heard a few parents say "how did she hit it that hard, she barely swung."   Her dad says "she now has 9 homeruns this year and missed number 10 by only 5 feet when it hit the bottom of the fence.  This swing is amazing". 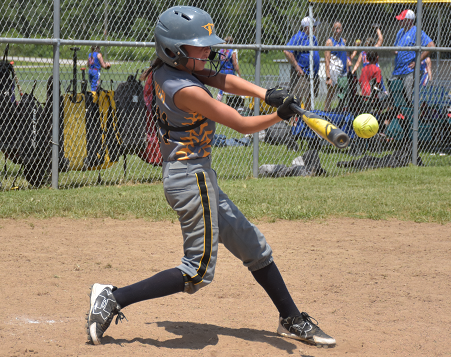 When our students learn to swing with their body, like the very best hitters on Team USA fastpitch softball, they hit the ball with so much more power consistently, like the student above.  They look so smooth, effortless and powerful.  They also have much better timing because their bat is in the same position from swing to swing (at the half way point of the swing).   With better timing, whether playing baseball or fastpitch softball, we have seen our students hit the ball 2 to 3 times harder and hit line drives 3 to 4 times more often than they did before.   It is really an amazing difference as you can see from the pictures above.

Anyone interested in learning how to become a much better hitter and see an amazing improvement in their timing, power and consistency can call Mike Sedberry at 304-722-6393 for more information.